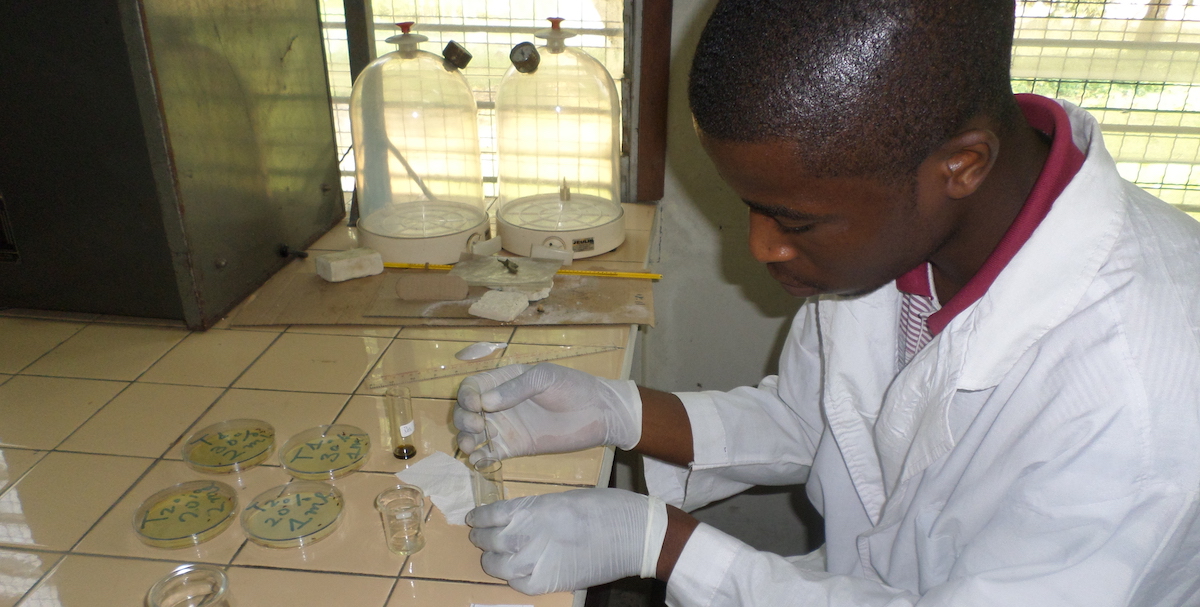 Composition and mechanisms of action

Scientific publications on the phytochemical composition of Artemisia annua and the mechanisms of action of its compounds.

Given its anti-malarial properties, Artemisia annua has been the subject of extensive biochemical studies. You will not find here an exhaustive, detailed, long and complex list, for experts only, but you should know that A. annua is rich in essential oils, polysaccharides, saponins, coumarins, acids, minerals, flavonoids and polyphenols.

The following are some of the important elements that make up its composition and are suspected of participating in its therapeutic action. Some substances are found in the leaves, others in the stems, again providing an additional argument for using the plant in totum. However, we must insist on the fact that the properties induced by these various constituents are currently being studied and that there is not yet any certainty or consensus on their synergetic action. These are very promising leads which require long and essential research to explain their mechanisms. But the fact remains that even without understanding them all, the action of the plant is spectacular.

Monoterpenes form the majority of the essential oil which has a strong aromatic odour, and include artemisia ketone, artemisia alcohol and camphor, all in variable proportions depending on the geographical origin pf the plant. These compounds have antibacterial and antioxidant activity and repellent action on certain insects. Artemisia ketone is believed to play a decisive role in inhibiting the formation of haemozoin 1. Hybrid Artemisia alas contain very little or none. Certain compounds such as alpha-Pinene, eucalyptol and limonene are known for their antiseptic properties and their ability to reduce parasitaemia.

The essential oil contains a large proportion, 40 to 70%, of thujone, which is present in many species of mugwort in varying degrees of concentration. Recent studies show the weak anti-malarial action of thujone-depleted species such as tarragon and the conclusive effect of those containing a lot of thujone such as wormwood, which would support the hypothesis that it could be one of the key molecules in anti-parasitic action, notably by counteracting the formation of haemozoin, in a similar way to quinine and artemisinin. Now that we know that species poor in artemisinin are just as good at treating malaria, we can open up the field of possibilities to other active ingredients. The anti-cancer properties of several plants, such as common wormwood  (Artemisia absinthium) could be proportional to the concentration of thujone. Plants such as sage (Salvia officinalis), which contain a lot of thujone, may have good anti-malarial properties.

Monoterpenes are at their highest concentration just before the plant flowers and are partly destroyed by too high drying temperatures, such as in full sun.

Also in the terpene family, are sesquiterpenes from the aerial parts of the plant, which include artemisinin, artemisinic acid, and arteannuin B, the three major secondary metabolites of this species, as well as growth regulators. Artemisinin is believed to play a role in disrupting the parasite’s mitochondrial activity, respiration and growth, as well as vascular inflammation. Nerolidol, another terpene, stops the development of the parasite at the intraerythrocytic stage.

More than 40 flavonoids have been isolated from A. annua, including luteolin, quercetin and casticin. Flavonoids alone have weak antimalarial effects in vitro, but in the presence of artemisinin increase their action by 50%. In addition, they have a long half-life, quercetin for example more than 5 days, potentially ensuring a long prophylactic action of the herbal tea. Luteolin is a molecule with proven antiplasmodic, anti-inflammatory and anti-cancerous properties.

A. afra is the species containing the highest concentration of flavone luteolin. It is a powerful iron chelator, reducing the absorption of free iron by the organism that the parasite needs, preventing its progression beyond the young trophozoite stage. Luteolin is common to all species of Artemisia with anti-malarial action. We therefore suspect an essential synergetic action between terpenes and flavonoids, once again underlining the importance of taking the plant in totum.

The plant also contains phytosterols with well-known anti-inflammatory benefits. Sulphated polysaccharides block the entry of sporozoites into hepatocytes. Coumarins, including scopoletine, which is very much present in A. afra, act on the metabolism and reinforce the antiplasmodic role of other molecules. Saponins increase the permeability of the intestinal wall to certain active molecules.

All plants of the Artemisia family are rich in polyunsaturated fatty acids which generate prostaglandins and stimulate monocytes. These fatty acids accumulate in adipose tissue and have a half-life of several weeks in the body, which may explain their contribution to prophylactic properties. Among these acids, arachidonic acid, a powerful anti-malarial agent, is to some extent exclusive to Artemisia.

Amino acids are very much present, the most important being arginine which generates nitrous acid, a formidable weapon by its oxidising power against plasmodium and other parasites.
In other medicinal plants such as the Viscous Inule (Inula viscosa), the anti-malarial effect of caffeoylquinic acids and chlorogenic acid has been demonstrated. Their concentration in Artemisia is 5 times higher than that of artemisinin.

In most studies, tannins, anthocyanins and proanthocyanidins, all with recognised prophylactic properties, have been forgotten. One of the reasons for this is simply the use of organic solvents, whereas most of these tannins are only soluble in water.

The same applies to certain salts or minerals contained in Artemisia. The plant is extremely rich in potassium and contains no sodium. Surprising when you consider the role that sodium and potassium play in the living world. One can suspect that this high concentration of potassium is lethal to plasmodium.

Clinical studies have shown that antimalarial compounds tested were effective at a much lower concentration when used in herbal teas or A. annua powder, than with the molecules alone. The presence of these numerous compounds would therefore increase the bioavailability of artemisinin and/or thujone or other terpenes and antimalarial molecules, thus multiplying their effectiveness. It is certain that only the ingestion of the plant in totum allows this to happen. But there is still a long way to go to understand the complexity of the mechanisms involved. 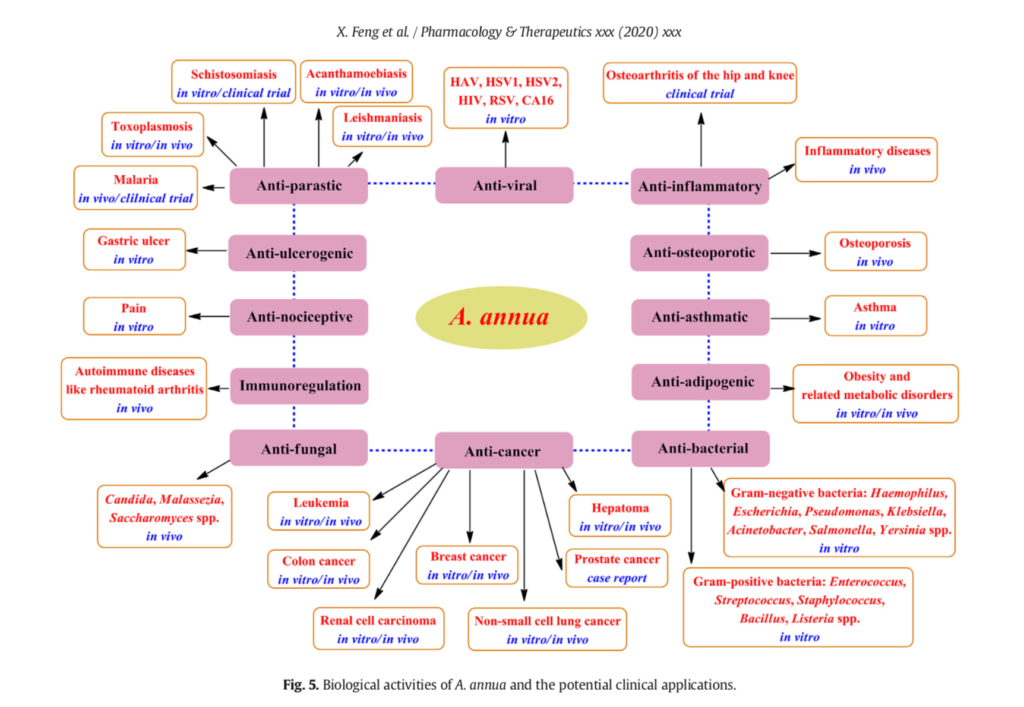 1 Heme is made up of iron and porphyrin and is present in haemoglobin, which transports blood gases. Certain compounds exercise their anti-parasitic activity by counteracting the aggregation of heme and the formation of haemozoin, a pigment characteristic of the presence of plasmodium. It appears during the degradation of the host cell. The iron contained in the red blood cells is potentially toxic for the parasite. It couples these heme groups which crystallise and then form a haemozoin molecule. It is by circulating in the body that these molecules end up reaching the hypothalamus where they disrupt its functioning, triggering the high fevers typical of the disease. The increase in the number of plasmodiums in the body increases the level of haemozoin in the blood and thus aggravates the fevers. Therefore, many studies focus on the inhibition of haemozoin, not only in plasmodium, but also in helminths, nematodes, trematodes and schistosomes.